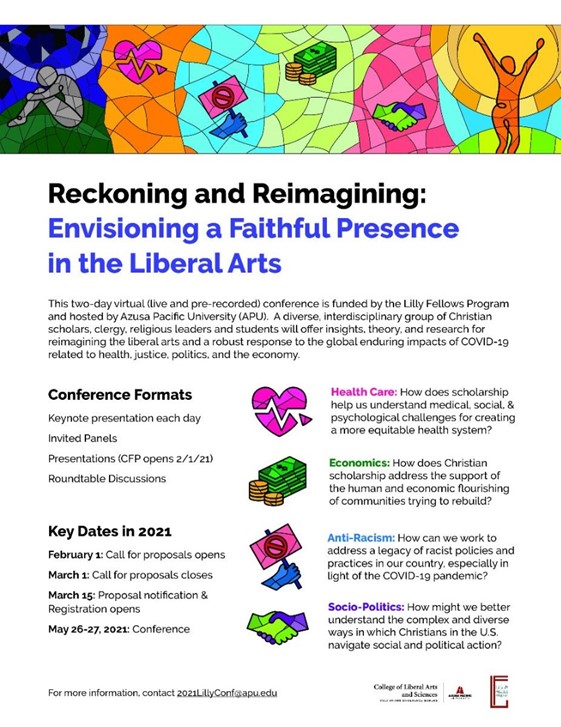 Call for proposals is now open. For more information go to https://www.apu.edu/lilly-conference/.

This conference has been postponed. The new date will be in the 2020-2021 academic year, specific date to be announced later.

Valparaiso University invites you to a special symposium, “Religion, State, and Nationalism: Problems and Possibilities." The symposium will take place in three sessions, with the first focusing on problems, the second on possibilities, and the third on integrating issues of faith, nationalism, and the problems of historical memory into undergraduate curricula.

Description: Today’s world is witnessing to new configurations of alliances and conflicts between religious institutions and the state. Religion is a key player in rewriting nationalist narratives that underpin state policies. In the United States, evangelical Christians influence state policies and contribute to nationalist agendas. The Orthodox Church is a leader in the resurgence of nationalism in post-Soviet Russia and the rehabilitation of the mythological past of “Holy Russia” that contributes to the state’s ideological agenda. Analysts express concern that religion will fuel the flames of nationalist isolationism and increase the possibilities for international incidents of polarization, violence, and war. Critics call for the complete separation of religious organizations from the state. In some places of the world, cooperation between religious institutions and the state can become a positive force at the local and international levels. Religious leaders can consult the state and contribute to the formation of national identity that is inclusive and does not pose a threat to international peace.

Application to host a Regional Collaboration or Conference

Matter and Spirit: A Seminar on Contemporary Chinese Art and Society
June 15- July 1, 2018

The Nagel Institute, in partnership with the Council for Christian Colleges and Universities and the Lilly Network of Church-Related Colleges and Universities, held a seminar and studio project in China for June 15- July 1, 2018. The seminar will be followed by an international traveling exhibition of the resulting works of art beginning in fall 2019.

This project convened 10 North American and 10 Chinese artists in a two-week seminar and studio event in Beijing, Nanjing, and Shanghai. Participants  engaged the realities of contemporary urban China, the Chinese visual arts scene, and each other. They especially focused on how some prominent Chinese contemporary artists have created art in response to these conditions, how Chinese Christians see both “matter and spirit” interacting, and how the struggle for integrity in China might inspire and reshape their own life work.

Learn more about past Regional Collaborations and Conferences here.

Save the date: The 31st annual LFP National Conference, "Science, Faith, and the Common Good," will be held at Boston College on October 8-10, 2021. Click here for more information.