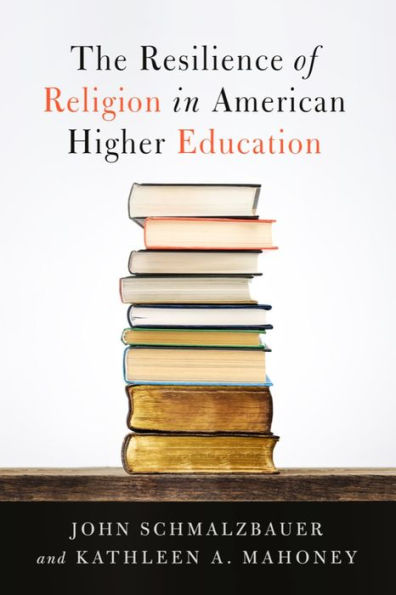 A well-worn, often-told tale of woe. American higher education has been secularized. Religion on campus has declined, died, or disappeared. Deemed irrelevant, there is no room for the sacred in American colleges and universities. While the idea that religion is unwelcome in higher education is often discussed, and uncritically affirmed, John Schmalzbauer and Kathleen Mahoney directly challenge this dominant narrative. The Resilience of Religion in American Higher Education documents a surprising openness to religion in collegiate communities. Schmalzbauer and Mahoney develop this claim in three areas: academic scholarship, church-related higher education, and student life. They highlight growing interest in the study of religion across the disciplines, as well as a willingness to acknowledge the intellectual relevance of religious commitments.  The Resilience of Religion in American Higher Education also reveals how church-related colleges are taking their founding traditions more seriously, even as they embrace religious pluralism. Finally, the volume chronicles the diversification of student religious life, revealing the longevity of campus spirituality. Far from irrelevant, religion matters in higher education. As Schmalzbauer and Mahoney show, religious initiatives lead institutions to engage with cultural diversity and connect spirituality with academic and student life, heightening attention to the sacred on both secular and church-related campuses.

The State of the Evangelical Mind: Reflections on the Past, Prospects for the Future
Edited by Todd Ream, Jerry Pattengale, and Christopher Devers
InterVarsity Press Academic

The “Catholic Intellectual Tradition Conference: Challenges and Opportunities for the Catholic University in the 21st Century,” at Sacred Heart University has been rescheduled to October 29-31, 2020. Click here for more information and to register.

Seton Hall to reschedule conference on Communication and Religion in the 2020 U.S. Presidential Election

Seton Hall University will reschedule its regional conference, “Communication and Religion in the 2020 U.S. Presidential Election,” with a date TBD. This conference is free to attend. Click here for more information.

Valparaiso University will reschedule its special symposium, “Religion, State, and Nationalism: Problems and Possibilities,” with a new date TBD. Registration is now open. Click here for more information and to register.

The Resilience of Religion in American Higher Education by John Schmalzbauer and Kathleen Mohoney is the 2019 winner of the LFP Book Award. For more information and to learn about the 2019 LFP Book Award Finalists, click here.

Announcing a call for Nominations for the 2020 Arlin G. Meyer Prize in Music Performance

The National Board of the Lilly Network of Church-Related Colleges and Universities is proud to announce the 2020 Arlin G. Meyer Prize in Music Performance. For more information and how to nominate, click here.