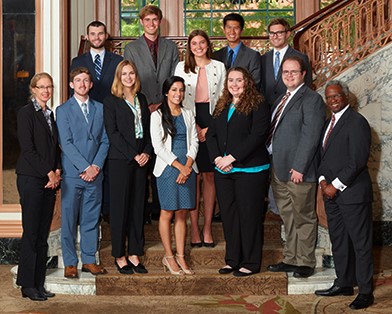 Aaron Abma is a PhD candidate in Philosophy at the University of Pittsburgh. He studies ethics and theories of value, as well as the history of ethics and ancient philosophy, with particular interest in competing understandings of goodness: the nature of the good, its function in ethical theories and human life, and its relation to other evaluative notions. His dissertation compares two understandings of the good: the good as good for some being, in the sense of benefit, and the good as that which is worthy of love. He argues that the good functions for us in ways that cannot be accounted for on an understanding of the good as the beneficial, and he begins to develops an account of the good as that which is worthy of love. He has taught courses in ethics and the introduction to philosophy, and he has a BA in Philosophy and a BS in Physics from Calvin College (now Calvin University, 2016).

Richard Burke is a PhD candidate in Government at the University of Virginia. His research interests broadly focus on political representation in subnational politics. His dissertation examines the role that national politics, local media and elite communication play in defining big-city politics. He has published articles on state legislatures in Social Science Quarterly and Political Research Quarterly. He has also written commentary pieces on American elections that have been featured in the Washington Post’s Monkey Cage blog and London School of Economics’ American Politics and Policy blog. His teaching interests include: public opinion, American political thought, and urban and local politics. He has a BA in Politics from the Fairfield University (2017, summa cum laude).

Tommy D’Addario earned a BA in English at Hope College (2016) and an MFA in Creative Writing, Poetry at the University of Montana (2019). After graduating, he taught poetry to elementary and middle school students through the Missoula Writing Collaborative, a non-profit organization devoted to empowering students through creative writing. Tommy’s poetry has appeared in Columbia Journal, Southern Humanities Review, and Western Humanities Review, among other publications, and he’s the author of the chapbook Requiring a More Articulate Courier of the Gods (Ghost City Press, 2020). He lives in Missoula, Montana, and currently works as an Implementation Consultant for Spreedly, a payments orchestration company.

Stephen Ferguson is currently pursuing his doctorate in Philosophy at Fordham University. He studies phenomenological hermeneutics, philosophy of religion, and political philosophy and has taught both Human Nature and Ethics. His research investigates the role of phronesis in addressing the critical problem of making true judgments within the framework of verbum hermeneutics, especially in the work of the early Heidegger, Gadamer, and Bernard Lonergan, SJ. Previously, Stephen studied at Boston College, where he received a BA in Philosophy with a minor in Economics (2015, summa cum laude) and was part of the Perspectives Honors Program. He also received an MA in Philosophy there in 2017, during which time he was a Lonergan Master’s Fellow. He has written book reviews for The Lonergan Review. Next year, he will be pursuing a JD at Yale Law School in the class of 2025. In his free time, Stephen loves running and biking, playing Scrabble, and swing dancing.

Daniel Gee is Assistant Professor of Music at Westmont College, where he directs the College Choir and Chamber Singers. Actively engaged in both choral and orchestral worlds, his conducting duties have included serving as Assistant Conductor of the Long Beach Symphony and the Santa Barbara Symphony, and as Associate Conductor of Choral Arts Initiative, a professional new music choir based in Orange County, CA. As a composer, he has had commissioned works performed by the Santa Barbara Quire of Voyces, the Westmont Orchestra, the Santa Barbara Choral Society, and the Westridge School Chamber Orchestra. He earned his Doctor of Musical Arts at the University of Southern California, and his dissertation presents a theological analysis of Osvaldo Golijov’s La Pasión según San Marcos.

Bridget Safranek Knuffke is a PhD candidiate in Philosophy at the Catholic University of America. She studies the history of philosophy, with particular emphasis on the Middle Ages, specifically the thought of St. Thomas Aquinas. Bridget plans to write her dissertation on Aquinas’ philosophy of punishment, exploring the Thomistic view of punishment and whether it remains relevant. Her other research interests include the moral effects of music, art, and technology. She has taught introductory courses in both classical and modern philosophy, and has a BA in Philosophy from the University of Dallas (2017, summa cum laude, Phi Beta Kappa) and a Licentiate in Philosophy from Catholic U (2020). Bridget is also a graduate fellow at the Institute for Human Ecology. She and her husband live in Washington, D.C.

Shannon Sandridge is a PhD candidate in Philosophy at Saint Louis University. She studies the metaphysics of agency, and is working to account for ways that people with severe cognitive disabilities share in distinctively human agency as it is understood by contemporary thinkers. Her work draws on cognitive developmental psychology and the importance of second-personal relationships. She is also interested in ancient philosophy, and is writing about Aristotle’s moral pedagogy. She has taught courses in Ethics, Logic, and Introduction to Philosophy, and spent a semester working with the God and the Good Life teaching team at the University of Notre Dame. She studied Philosophy and German in her undergraduate at Baylor (2017, cum laude), which was formative in her understanding of how to balance faith and reason.

Hannah Scupham is a doctoral candidate in English Literature at the University of Kansas (KU). A KU Chancellor’s Fellow, she specializes in nineteenth-century British literature and popular romance studies. Her dissertation work explores the affective politics of the Victorian marriage plot as well as contemporary reimaginings of the Victorian period through mass-market romance novels. In 2021, she was the recipient of the Romance Writers of America’s (RWA) Academic Research Grant. In 2013, she was the recipient of a Fulbright Teaching Assistantship. As Graduate Teaching Assistant at KU, she has taught courses in English composition and British literature as well as a course on romantic comedies. She received her BA in English and German from Valparaiso University (2013, summa cum laude), her MA in English Literature from KU (2017), and she also holds a graduate certificate in Women, Gender, and Sexuality Studies from KU (2017). Her work has appeared in the Wilkie Collins Journal. When not doing academic work, Scupham enjoys baking and binge watching tv shows.

Elisa Torres Neff is a PhD candidate in Philosophy at the University of Dallas. Graduating Belmont Abbey College in 2017 with a BA in Literature and Theology, she also completed minors in Christianity & Culture, Medieval Studies, and Political Philosophy. Her areas of interest include Virgilian piety, Socratic recollection, and the political conditions for virtue. Over the past several years, Neff has led (and continues to lead) a variety of conferences and seminars on the Great Books focusing on such topics as “The Ancient Quarrel Between the Ancients and Moderns,” “Friendship and Love from Plato to Flannery O’Connor,” and most recently on “The Drama of Atheist Humanism.” In the Spring of 2021, Neff received a position as a Visiting Instructor for the Honors College at Belmont Abbey, where she is currently teaching a course on Shakespeare’s Roman Plays, and a course on the Drama of Modern Atheism. She lives with her husband in Charlotte, NC.

Lisa DeBoer teaches the History of Art at Westmont College in Santa Barbara, California. Her areas of interest include early modern print culture and the uses of the visual arts in Christian worship. She is the author of “The Sidelong Glance: Battlefield Emotions in the Art of the 17th century Dutch Republic,” in Battlefield Emotions 1500-1850: Practices, Experience, Imagination, eds. Erika Kuipers and Cornelis van der Haven (Palgrave MacMillan, 2017), and The Visual Arts in the Worshiping Church (Eerdmans, 2016), which won the 2016 Lilly Fellows Program Arlin G. Meyer Prize. Dr. DeBoer served as mentor for the Fifth Cohort of Lilly Graduate Fellows.

John E. Ware is a Professor of Music at Xavier University of Louisiana, in New Orleans, where he teaches Voice and Conducting, and is the Conductor of the Xavier Concert Choir and University Chorus. With extensive training as a classical singer, Dr. Ware has chosen to use this aspect of his education and experience maintaining a vigorous studio of aspiring vocalists where he works with some 15 young singers each year. Several of his students have been accepted to some of the nation’s premier graduate schools and have gone on to significant performing careers. Dr. Ware is the designated Rosa Keller Endowed Chair in Music at Xavier University and has composed and presented several original choral works. He holds memberships in the National Association of Teachers of Singing, and is a state officer in the American Choral Director’s Association. He is Conductor and Musical Director of the New Orleans Black Chorale, a group dedicated to the preservation of the American Negro spiritual and the art music of African American composers. In 2010 the city of New Orleans honored Ware with a Lifetime Achievement Award for his work with the chorale in performances and research related to Images and Metaphors in the American Negro Spiritual. Dr. Ware has also served on the Lilly Fellows Program National Board.