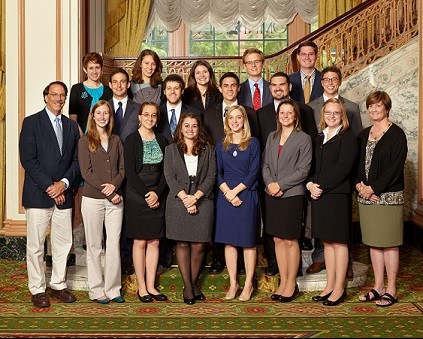 Elizabeth Baker received her B.A. in History from Gordon College in 2012. She is pursuing a Ph.D. in European History at the University of Notre Dame where she studies nineteenth century British cultural history. Her research currently focuses on the intersections of Empire, gender and class relations in cultural institutions such as schools and museums.

J. Laurence Cohen received his B.A. in English and Biblical/Theological Studies from Wheaton College in 2010. In the fall of 2013 he will enter the M.A./PhD program in English at Emory University. His interests revolve around the relationship between religion and literature, American preachers, modernism, and the novel.

Gerad M. Gentry graduated from Houghton College where he majored in art, English literature, and philosophy. He subsequently received an M.A. in philosophy from the University of Chicago. Gerad was a 2011 Vita Institute Research Visitor at The University of Notre Dame where he studied bioethics.  Currently, Gerad is a USC Presidential Fellow pursuing a Ph.D. in philosophy. His research interest is the intersection of art and rationality. His work focusses on German Idealism and the philosophy of G.W.F. Hegel. His secondary interest is bioethics within an Aristotelian tradition of ethics.

Marian J. R. Gilton received her B.S. in Physics and Theology from Fordham University in 2013. In the fall she will begin her Ph.D. in Logic and Philosophy of Science at University of California, Irvine where she will focus on philosophy of physics. She is particularly interested in quantum field theories and in connections between physics, philosophy, and theology with respect to cosmology.

Gianna Lillian Gugliotti received her B.A. in English literature from Assumption College in 2013. She is pursuing a Ph.D. in English literature with a concentration in Medieval Studies at the University of Connecticut. She is interested early medieval texts, specifically examining them for the evolution of narrative and the development of interiority.

Kolby Knight received a B.A. from Mercer University in 2010 and an M.Div. from Wake Forest University in 2013.  His interests revolve around the indigenization of the Catholic Church in America and specifically how Catholics in the nineteenth century engaged the establishment of a national public school system beginning in the 1840s.  More broadly, his work focuses on the ways that law and religion interact and gives attention to the relationship between religious and national identity.

Stephanie L. Kucsera received her B.A. in theatre and English literature from the University of Indianapolis in 2011 and her M.A. in the Humanities from the University of Chicago in 2012.  This fall she will begin the Ph.D. program in English at Loyola University Chicago where she will focus in Renaissance literatures with an emphasis in early modern English drama.  She is interested in the intersection of theatre and theology during the Reformation period—her primary research interests include Catholic visual culture, the interpretation of sacred ritual onstage, and the transmission of religious heritage through drama.

Emily Medina graduated in May 2013 from Mount St. Mary’s University with a B.A. in International Studies.  She is entering the University of Pennsylvania this fall to pursue a Ph.D. in Political Science with a specialization in Comparative Politics.  At Penn, she plans to study development in Latin America, more specifically the effects of modernization on indigenous culture.  Additional areas of interest include democratization, colonialism, and political theory.

Sarah Messer received her B.A. in History in 2013 from Boston College. She is continuing her studies at the University of Wisconsin-Madison where she is enrolled in a M.A./Ph.D. program in Modern European History. Sarah is interested in the social history of France in the first half of the twentieth century, and particularly focuses on the experiences of ordinary people during the world wars.

Nicole Iverson Schrag received her B.A. in English from Wheaton College in 2013. Beginning in the fall of 2013, she will attend the M.A./Ph.D. program in English at the University of Texas at Austin, where she will study modern and contemporary British literature. Her primary research interest is the intersection of contemporary British fiction and urban planning. She has a secondary interest in Rhetoric and Composition, particularly in composition pedagogy.

Amy E. Schroeder received her B.A. from Whitworth University in 2009. After teaching at Payap University in Chiang Mai, Thailand, for a year, Schroeder received her M.A. in English literature at Baylor University. She will be remaining at Baylor to complete her Ph.D., focusing on twentieth century poetry. More specifically, she is exploring daily and religious rituals in modern and postmodern poetry—by studying rituals, she hopes to illuminate the changing conception of belief in the twentieth century.

Jeffrey Skaff graduated from Hope College in 2010 with a B.A. in Religion and from Princeton Theological Seminary in 2013 with an M.Div. He is currently pursuing a Ph.D. in Systematic Theology, also at Princeton Theological Seminary. His research will focus on the Reformed theological tradition, especially in the trajectory that runs through Karl Barth. He is particularly interested in the mutually critical conversation between Barth, the older Protestant tradition, and Roman Catholicism brought about by Barth's innovations in the doctrines of election, creation, and providence.

R. Brian Tracz received his B.S. in Biology and Philosophy at Boston College in 2012. After having spent a year as an English docent at the Katholische Universität in Eichstätt, Germany, he is pursuing a Ph.D. in Philosophy at the University of California, San Diego. His research interests include philosophy of mind, phenomenology, and philosophy of neuroscience, with additional focus in philosophy of technology and German philosophy from Kant through Husserl. He also has a long-standing interest in music and aesthetics.

Katrina Jennie-Lou Wheeler received a B.A. at Whitworth University in French and Theology in 2008. She went on to receive a M.A. in the History of Christianity at Wheaton College in 2012. She is currently pursuing a Ph.D. in History at the Graduate Center of the City University of New York. Her research centers on the history of
Christianity in France during the eighteenth and nineteenth centuries. She is specifically interested in the diverse ways that Christians reacted to and interacted with the French Revolution.

Jane Kelley Rodeheffer is the Fletcher Jones Chair of Great Books in the Humanities at Pepperdine University in Malibu, California.  A philosopher, she holds degrees from Boston College, Harvard, and Vanderbilt (M.A., Ph.D.).  Professor Rodeheffer has published a range of articles in philosophy, literature, and great books, and she is the co-editor of three collections of essays.  Her awards include the Brother J. Robert Lane Chair in Humanities and the Brother Charles Severin Award for Excellence in Teaching, and the 2011 Graven Award from Wartburg College, which honors a Christian whose faith informs her work in the world.  She served as one of the mentors of the First Cohort of Lilly Graduate Fellows.

Arlin C. Migliazzo is professor of history at Whitworth University in Spokane, Washington.  He studies and teaches primarily in American history but has also taught courses in modern Russian history and warfare in the first half of the 20th century as well as classes in the university’s core curriculum.  He has published articles and essays on contemporary Korean leadership, Native American issues, church-related higher education, ethnicity and immigration in the colonial and early national American South, and Pacific Northwest history.  Dr. Migliazzo has edited two books:Teaching As An Act of Faith: Theory and Practice in Church-Related Higher Education (Fordham University Press, 2002), which was generously supported by the Lilly Fellows Program and Lands of True and Certain Bounty (Susquehanna University Press, 2002), the first English language edition of the geographical theories and colonization strategies of the Swiss explorer Jean Pierre Purry.  His third book, To Make This Land Our Own: Community, Identity, and Cultural Adaptation in Purrysburg Township, South Carolina, 1732-1865, was published by the University of South Carolina Press in October 2007 and recently won the 2013 National Award for Research and Preservation from the Society of Daughters of Colonial Wars.  He is currently working on a biography of Dr. Henrietta C. Mears.  Migliazzo has served as Whitworth’s faculty representative to the Lilly Fellows Program since its inception in 1991 and was a member of the National Network Board from 2001-2005.  He has conducted faith and learning workshops at Northwest University (Kirkland, WA) Xavier University (New Orleans), Concordia University (Portland, OR), and Whitworth University.

The 2022-2024 Lilly Postdoctoral Fellowship in the Humanities and the Arts will be taking applications through January 19, 2022. To learn more about this two-year, residential postdoctoral fellowship at Valparaiso University, click here.