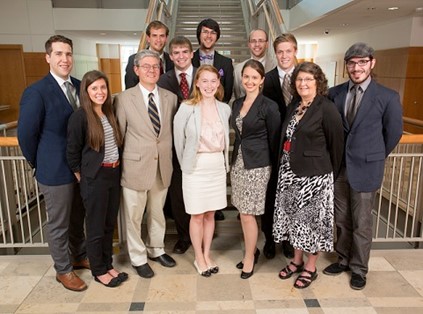 Sonya Bilocerkowycz's essays and poems have appeared in Colorado Review, Guernica, The Southampton Review, Ninth Letter, Image, Crab Orchard Review, and elsewhere. Before completing her MFA at Ohio State, she served as a Fulbright Fellow in Belarus, an educational recruiter in the Republic of Georgia, and an instructor at Ukrainian Catholic University. She was the 2017-18 Milton Postgraduate Fellow in Creative Writing at Seattle Pacific University. Sonya's first book, a collection of linked essays about politics and responsibility in the post-Soviet space entitled On Our Way Home from the Revolution, won the 2019 Gournay Prize. It will be featured in the 21st Century Essays series, published by the literary imprint of Ohio State University Press.

Brad Boswell is a PhD student in the Graduate Program in Religion at Duke University, where he studies Early Christianity.  His dissertation explores fifth-century Christian-Hellenistic intellectual conflict, focusing on Cyril of Alexandria’s untranslated Against Julian, a refutation of the Roman Emperor Julian (‘the Apostate’).  He has taught for church history and Greek courses at Duke Divinity School.  Brad received a Master of Theological Studies at Boston College and a Bachelor of Arts at Union University, and he now lives with his wife and three daughters in Durham, North Carolina.

Griffin Klemick  is a PhD candidate in Philosophy at the University of Toronto. He studies the history of 20th-century philosophy, especially pragmatist approaches to meaning and justification. His dissertation explicates and evaluates broadly Peircean forms of classical and neo-pragmatism, examining the interplay between their anti-skeptical, anti-metaphysical character and the emphasis they place on the external world’s constraining our thinking. He is also interested in pragmatist approaches to metaethics (with work on this topic appearing in Synthese) and in phenomenology, especially Levinas. Griffin has broad teaching interests: he has served as primary instructor of a historical introduction to philosophy and a survey of metaethics and moral theory, with additional teaching experience in epistemology, the history of moral and political philosophy, and the philosophy of religion. He has a BA from Wheaton College (2012, honors in philosophy, summa cum laude) and an MA from Northern Illinois University (2014, named outstanding graduate student in philosophy).

John Dixon Mirisola received an MFA in creative writing from the University of California, Riverside, in 2017. His thesis, a novel-in-progress, explores the contradictions and consequences of family love, belief, and the American mental health system. He is particularly interested in 20th-Century and contemporary experiments in literary form, the language surrounding mental illness, and the role of music in literature. John has written reviews of contemporary fiction for the Los Angeles Review of Books, The Millions, and Zyzzyva. At UC Riverside he received an Outstanding Teaching Award for his fiction workshop, and since earning his degree he has taught creative nonfiction, introduction to creative writing, and composition. John holds a BA in English from Gordon College (summa cum laude). He lives just north of Boston

Alex Mouw is pursuing a PhD in English at Washington University in St. Louis. He studies American literature with current emphases on twentieth-century poetry and poetics as well as religion and literature. Before beginning the doctoral program, he served as a visiting assistant professor of English at Hope College and has taught courses in composition, creative writing, and interdisciplinary studies. He holds a BA in English, History, and Classical Studies from Hope College (2014) and an MFA in Creative Writing from Purdue University (2017). His scholarship, poetry, and creative nonfiction appear in a variety of literary and academic journals.

Katherine G. Plants received her B.A. in 2013 from Loyola University Maryland with a double major in English and Classical Civilizations. She is continuing her studies this fall in the M.A./Ph.D. program in English at The Pennsylvania State University, where she plans to focus on early modern English literature. Her primary research interest is classical reception within early modern prose and poetry.

Jordan F. Slavik is a PhD candidate in history at the University of Maryland. He studies ancient Mediterranean history, with interests in imperialism, warfare, and historiography during the Roman Republic and Classical Greek periods. His dissertation analyzes Polybius' Histories, specifically looking at the Greek historian's understanding of the rise and maintenance of Roman imperialism between 264-146 BCE and at Polybius' attempts through his historical narrative to guide a Roman readership towards moral self-correction. Jordan has taught courses in Greek and Roman history, war and imperialism, the Athenian Democracy, world history, and the recreation of history through video games. Jordan has a BA in history and a BA in theology from Saint Louis University (2014, summa cum laude) and an MA in history from the University of Maryland (2017).

Andrew Soria is currently an English teacher and chair of the Languages Department at Pacifica Christian High School in Santa Monica, CA. He is also a MATS student at Nazarene Theological Seminary. While a Lilly Fellow, he was pursuing doctoral work in comparative literature at the University of Southern California, which he finished with an MA in order to make a shift into full-time high school teaching. Before that, he earned a BA in English Literature and Spanish (with a French minor) from Azusa Pacific University. His intellectual interests include the intersection of language choice and religious identity (particularly in the context of memoirs), modern Jewish and Christian conceptions of sovereignty, and pedagogies of literary theory for high schoolers.

Jared Warren is a PhD candidate in modern European history at New York University. His research focuses on religious pluralism, politics, and intellectual history, primarily in the lands of the former Polish-Lithuanian Commonwealth and France. His dissertation explores how Poland's historic geographical position at the crossroads of Catholicism, Orthodoxy, and Islam propelled nineteenth-century European debates over Polish sovereignty. He has taught European and Atlantic history, and is currently teaching the required global history survey at The Cooper Union. Prior to NYU, he received his education at Calvin College, the University of Kansas, and the Jagiellonian University. His work has been supported by the Association of Slavic, Eurasian and East European Studies; the Central European History Society; and the Auschwitz Jewish Center, among others, and he has been a visiting fellow at the University of Warsaw and the École Normale Supérieure. He currently splits his time between New York and Poland.

Hilary Yancey  is a PhD candidate in Philosophy at Baylor University. She focuses her research in the areas of metaphysics, philosophy of biology, philosophy of disability, and ethics, with additional interests in ancient philosophy, particularly Plato and Aristotle. Her dissertation explores the metaphysics of bodily parthood, defending a view on which prostheses are body parts, rather than merely devices or tools. Her current course, Critical Thinking, brings logic and medical ethics together. She graduated with a BA in Religion, Ethics and Politics (2012, summa cum laude) from Gordon College, and recently published her first book, Forgiving God: A Story of Faith (2018, FaithWords). She lives with her husband, Preston, and her two children Jack and Junia, in Waco, Texas.

Paul J. Contino is Blanche E. Seaver Professor of Humanities at Pepperdine University, where he teaches in the Great Books Colloquium and was awarded the Howard A. White Award for Teaching Excellence. At Pepperdine, with his wife, Maire Mullins, he serves as Co-Editor of the journal Christianity and Literature and as Associate Director of the Center for Faith and Learning. Before coming to Pepperdine, he received his Ph.D. at the University of Notre Dame, after which he taught for twelve years in Christ College, the honors college of Valparaiso University. With Susan Felch, he has edited and introducedBakhtin and Religion: A Feeling for Faith (Northwestern UP, 2001). His has published numerous essays -- on Dante, Zhuangzi, Austen, and contemporary Catholic writers -- but his primary scholarly focus is on the Christological dimension of Dostoevsky’s Brothers Karamazov.  His essays on that novel have appeared in various book volumes and journals.

Susan Felch received her undergraduate education at Wheaton College and her Ph.D. from The Catholic University of America in Washington, D. C.  She has taught in the English Department at Calvin College in Grand Rapids, Michigan since 1992 and is also currently the Director of the Calvin Center for Christian Scholarship. She publishes articles and books in sixteenth-century British literature and contemporary literary theory and teaches first-year rhetoric, introductions to world and British literature, Shakespeare and other sixteenth-century authors, environmental literature, and senior seminar. Recent publications include two volumes of The Emmaus Readers: Listening for God in Contemporary Fiction (Paraclete 2008, 2009), coedited with Gary Schmidt, with whom she also edited the four volume Spiritual Biographies of the Seasons, and Elizabeth I and Her Age (W. W. Norton, 2009), coedited with Donald V. Stump, which received the 2010 Teaching Edition prize from the Society for the Study of Early Modern Women. In 2009, she won the Josephine A. Roberts Scholarly Edition Award for her book Elizabeth Tyrwhit’s Morning and Evening Prayers (Ashgate, 2008), and in 2000, she received an honorable mention for her first book, The Collected Works of Anne Vaughan Lock (RETS, 1999). Her work on Queen Elizabeth, Lock, and Tyrwhit have been recognized as “significant and authoritative contributions to the field of early modern scholarship.” She has also written Selected Readings of Bible Stories / 圣经故事选读 , a textbook for teaching advanced English in China, co-authored with Xing Ling (Yunnan University Press, 2011) and Metaphors and Imagination: Rethinking Christian Higher Education co-authored with David Smith and forthcoming from Eerdmans. She enjoyed growing up as a TCK (third-culture kid) in Papua New Guinea and still loves to travel

Call for Applications: Hope College is hosting a Network Exchange March 6-8, 2022 to showcase their annual month-long community-wide reading program. Click here for more information and how to apply.